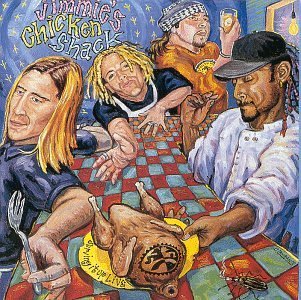 Available for the first time nationwide, Giving Something Back is a live album recorded at various clubs in the band's home base of Baltimore, MD. It has many live versions of songs on Jimmie's Chicken Shack's Rocket/Island Record's debut, Pushing The Salmanilla Envelope. On this recording, the Shack is "raw poultry," leaving in all the screaches and miscues to create the true live music sound.

Jimmie's Chicken Shack formed in the early 1990's in Annapolis, MD. After self-releasing two CDs and garnering a huge grass-roots following in the Baltimore/DC area, JCS signed with Elton John's Rocket/Island Records in 1996. They released their major label debut, Pushing The Salmanilla Envelope, in June of 1997, and it has subsequently sold over 300,000 copies nationwide. Currently the band is recording their follow-up album for Rocket/Island, set for release in 1999.